A Brief History of Marshmallows 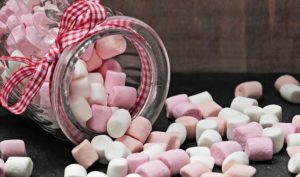 Marshmallows are a classic treat.

Marshmallows are a classic treat. They come in many shapes, sizes, colors, and flavors. Marshmallows are also incredibly versatile. You can roast them over a campfire or drop a couple into a mug of hot cocoa. However you choose to eat your marshmallows, they are always delicious. Everyone loves them, but how much do we really know about marshmallows?

The Food of the Gods

Around 1900, marshmallows were finally available on a much larger scale. They were sold in tins as penny candy. This mass production was made possible toward the end of the nineteenth century by the invention of the starch mogul manufacturing system, which allows runnier materials to be used. Originally, marshmallows were shaped with wooden machine parts; by 1911, the wooden parts had all given way to steel machinery. Eventually, the mallow root was replaced by gelatin and other whipping agents.

Head to WockenfussCandies.com and browse our wide selection of chocolates and candies; we promise you will not be disappointed! Wockenfuss Candies is one of the oldest candy makers in Baltimore. We opened our doors in 1915 and have proudly served the people of Baltimore ever since. If you have any questions about our wide selection of chocolates, please contact Wockenfuss Candies by calling 1-800-296-4414 or email info@Wockenfusscandies.com. When you’re not savoring our sweets, stay satisfied by following us on Facebook, Twitter, and Pinterest!

Categories: Wockenfuss Candy | Tags: Summer Candies and Wockenfuss Candy
This entry was posted on Friday, August 14th, 2020 at 3:23 pm. You can skip to the end and leave a response. Pinging is currently not allowed.
Want a sweet deal?
Sign-up to receive emails and save 10% off your first order.
Sign-up
By submitting this form, you agree to receive automated promotional marketing emails from Wockenfuss Candies. Unsubscribe at any time. Offer is valid for new subscribers only. Offer valid online only.