Sizzle, Crack! The History of Popcorn 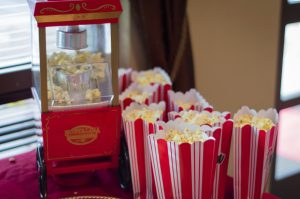 In the mood for popcorn?

On Thursday, we celebrated National Popcorn Day! This crunchy treat comes disguised in many forms: sweet, savory, or even rolled into a ball. It’s been enjoyed at ball games, movie theaters, and even on top of ice cream. Hopefully, you were able to stop by a Wockenfuss store to sample a handful of our delicious homemade caramel popcorn. This week we’re going to look at the story behind this popular snack, and discover its tasty secrets.

It Started With Corn

Corn was first domesticated in Mexico 9,000 years ago; archaeologists have discovered that people have known about popcorn for thousands of years. Mexicans discovered that when corn was subjected to high heat, the kernel would pop into a fluffy, golden tidbit!

During the 19th century, the popping of corn was achieved manually and sold under names such as ‘pearls’ or ‘nonpareils’. The term ‘popped corn’ first appeared in John Russell Bartlett’s 1848 Dictionary of Americanisms.

Popcorn was fairly inexpensive during the Great Depression. Popping corn became a relatively cheap food to make and sell, so it grew in popularity as an American snack. During WW2, sugar rations diminished candy production, and Americans started consuming three times as much popcorn. In 1938, a Midwestern theater owner named Glen W. Dickson installed popcorn machines in the lobbies of his theaters, and the trend began to spread.

The popcorn craze became so widespread that in 1981, General Mills received the first patent for a microwave popcorn bag. Americans eat around 17 billion quarts of popcorn each year. This amount would fill the Empire State building 18 times!

Get Your Sweets At Wockenfuss!

Since 1915, Wockenfuss has been a family owned and operated business creating the finest confections in Baltimore, Maryland. With our nine convenient locations throughout Maryland, there is sure to be a Wockenfuss store near you. Come visit us to see our selection of winter favorites such as our Caramel Popcorn & Milk Chocolate Caramel Popcorn.

We’d be happy to help you select the perfect sweet treat, whether for you or as a gift for a loved one. If you have any questions about our sweet seasonal candies, please contact Wockenfuss Candies by calling us at 1-800-296-4414 or emailing info@Wockenfusscandies.com. When you’re not savoring our sweets, stay satisfied by following us on Facebook, Twitter, Google+, and Pinterest too!

Categories: Wockenfuss Candy | Tags: popcorn
This entry was posted on Friday, January 20th, 2017 at 4:09 pm. You can skip to the end and leave a response. Pinging is currently not allowed.
Want a sweet deal?
Sign-up to receive emails and save 10% off your first order.
Sign-up
By submitting this form, you agree to receive automated promotional marketing emails from Wockenfuss Candies. Unsubscribe at any time. Offer is valid for new subscribers only. Offer valid online only.