The Story of Chocolate Gelt: A Hanukkah Tradition 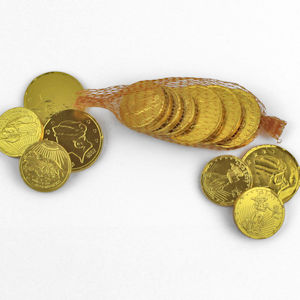 One thing that every Hanukkah celebration has in common is the gelt.

Hanukkah is the Jewish Festival of Lights. For eight nights in December, Jews everywhere light their menorahs, spin dreidels, give each other gifts, and spend quality time with one another. One thing that every Hanukkah celebration has in common is the gelt.

The word “gelt” means “money” in both Hebrew and Yiddish. Chocolate gelt are the chocolate coins that are typically given to children during Hanukkah.  Jewish or not, you’ve probably seen the familiar mesh bags with the shiny wrappers inside. You may have even been given a few over the years. No one knows exactly how this yummy tradition started, because there are just so many theories out there. Let’s explore a couple of them.

One theory takes us all the way back to the seventeenth century in Poland. Back then, Polish Jews would give their children money during Hanukkah that the children were then supposed to give to their teachers. The children eventually started to demand that they be given some money to keep for themselves, so the tradition became to just give the children small sums of money.

Another theory takes us back further still, to when the ancient Jews were bravely fighting for independence from the Greeks. When they did finally defeat the Greek armies, the Jews wanted to create national coins to celebrate. The theory is that gelt is an homage to these coins and what they represent.

When Were the Real Coins Replaced with Chocolate?

Regardless of which origin story you subscribe to – and there are so many more! – it’s clear that Hanukkah gelt has been around for centuries. So, at what point did the real money get replaced with chocolate? That particular change came about in the early twentieth century. The Loft’s candy company of New York City was the very first producer of chocolate gelt. They molded thin, round pieces of chocolate and wrapped them in shiny foil wrappers. The shiny coins were then packaged in small mesh bags that were meant to look like money bags.

Today, the tradition of giving chocolate gelt at Hanukkah is alive and well. Wockenfuss Candies is proud to offer our own delicious milk chocolate gelt. Come in and pick some up today!

Head to WockenfussCandies.com and browse our wide selection of chocolates and candies; we promise you will not be disappointed! Wockenfuss Candies is one of the oldest candy makers in Baltimore. We opened our doors in 1915 and have proudly served the people of Baltimore ever since. If you have any questions about our Wide Selection of Chocolates, please contact Wockenfuss Candies by calling 1-800-296-4414 or email info@Wockenfusscandies.com. When you’re not savoring our sweets, stay satisfied by following us on Facebook, Twitter, Google+, and Pinterest!

Categories: Chocolate | Tags: Hanukkah Candy, Hanukkah Gelt, and Wockenfuss chocolate
This entry was posted on Friday, December 15th, 2017 at 12:02 pm. You can skip to the end and leave a response. Pinging is currently not allowed.
Want a sweet deal?
Sign-up to receive emails and save 10% off your first order.
Sign-up
By submitting this form, you agree to receive automated promotional marketing emails from Wockenfuss Candies. Unsubscribe at any time. Offer is valid for new subscribers only. Offer valid online only.