The Surprising History of Jordan Almonds 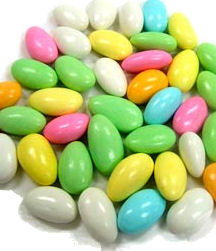 Whether you know them as that ever-present wedding favor or as a pastel treat in your grandmother’s candy dish, Jordan almonds have been with us for quite some time.

Whether you know them as that ever-present wedding favor or as a pastel treat in your grandmother’s candy dish, Jordan almonds have been with us for quite some time. They’re crunchy, elegant, candied almonds that can be surprisingly enticing. If you’re a fan of this textural treat, read this post to learn more about its storied history.

Jordan Almonds and the Mediterranean Diet

The most likely venues for heaping bowls of Jordan almonds are celebrations hosted by Southern European and Middle Eastern families. These specific kinds of candy-coated nuts originate from that corner of the world, and it’s been documented that ancient Romans used to enjoy them on festive occasions! If you go a bit further East you’ll find a likely candidate for the origin of the Jordan almond’s name; many people have thought that the name comes from the region around the Jordan River (they’re also known as Italian Confetti). In Greece, they’re called koufeta which directly translates to “candies.”

Sugarcane and white sugar are relatively recent developments in international trade, so the original Jordan almonds would have been a bit different than the ones we know today. Those in ancient times would have been encased in a shell made of honey; ancient partygoers would have found our smooth sugary shells quite shocking! Something we have in common is that then and now, we love to candy lots of foods. Ancient folks would coat seeds, cinnamon bark, and dried fruits in the honey as well as almonds. Nowadays you can find Jordan pistachios, chocolate, espresso beans, and more.

Traditionally, as part of a wedding celebration, Jordan almonds should be given in odd, single-digit numbers. This represents the couple staying undivided and sharing equally throughout their marriage. The sweet symbolism of each almond may come written out on a small card attached to the bag. Often a poem will be printed that sends the couple off to “health, wealth, happiness, children, and a long life.” You’ll notice there are five wishes here, which typically correlate to five almonds per bag, but there’s no hard and fast rule here.

Head to WockenfussCandies.com and browse our wide selection of chocolates and candies; we promise you won’t be disappointed! Wockenfuss Candies is one of the oldest candy makers in Baltimore. We opened our doors in 1915 and have proudly served the people of Baltimore ever since. If you have any questions about our wide selection of chocolates, please contact Wockenfuss Candies by calling 1-800-296-4414 or email info@Wockenfusscandies.com. When you’re not savoring our sweets, stay satisfied by following us on Facebook, Twitter, and Pinterest!

Categories: Sweet Treats | Tags: Baltimore candy company, candy buffet, and candy wedding favors
This entry was posted on Friday, March 11th, 2022 at 11:05 am. You can skip to the end and leave a response. Pinging is currently not allowed.
Want a sweet deal?
Sign-up to receive emails and save 10% off your first order.
Sign-up
By submitting this form, you agree to receive automated promotional marketing emails from Wockenfuss Candies. Unsubscribe at any time. Offer is valid for new subscribers only. Offer valid online only.