The Origins of Malted Milk Balls 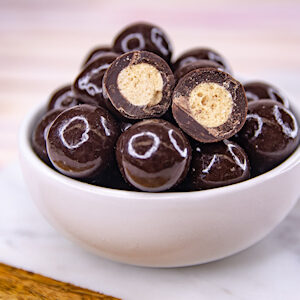 Learn more about how malted milk balls got their start!

Malted milk balls are a classic chocolatey favorite. In 1887, William Horlick, a food manufacturer from England, settled in Racine, Wisconsin, and experimented with producing dried milk products. Thus, Horlick created malted milk powder. At the time, he wanted to market the idea for health benefits. Instead, people used the malted milk powder to sweeten everything imaginable, including fountain drinks, waffles, and even infant formula. However, it wasn’t until 1936 that the idea to make candy sweeter with malted milk emerged. Forrest Mars Sr. created the first candy using a malted milk center. Here are more details about the origins of malted milk balls.

Malt is a germinated cereal grain that manufacturers dry in a process called “malting.” Malted milk powder consists of wheat, non-diastatic (doesn’t degrade or break down starch or sugars) malt, and powdered milk ground finely to make a gritty powder. While extra-added sweeteners enhance non-diastatic malt, it’s sweet on its own.

The center of a malted milk ball consists of malted milk powder and white chocolate or white coating bark combined, rolled into balls, and coated with milk chocolate. For creative fun or for holiday treats, sometimes people use other coatings. However, the center typically stays the same.

Initially, Mars marketed this delicious treat as “Maltesers.” In 1937, he first sold them in the UK; , it wasn’t until 1939 that the product reached American soil. In 1949, when the Overland Candy Company became part of the Chicago Biscuit Company, Leaf Gum, and Leaf Machinery, they rebranded the Whoppers as “Giants.” Giants were renamed Whoppers and sold as unwrapped penny candy. Eventually, Whoppers came in cellophane packages of twos and fives; in 1950, the iconic packaging, still recognized today, started being used. Egg-shaped whoppers that resembled bird eggs for Easter were popular during this time.

Over the years, Whoppers changed ownership many times. Hershey Foods Company took over the production of Whoppers in 1996 and is still manufacturing malted treats today. However, manufacturers still produce Maltesers in the Mars factory in Slough, England. Mars even sued Hershey for trademark infringement over the Maltesers brand within the past few years. Hershey’s came out with an all-red package similar to Mars’ and dropped the “s” on Maltesers.

However complicated the history of malted milk balls might be, what’s not complex to understand is that malted milk balls are delicious. Try our mouth-watering rendition of this classic treat by ordering online or stopping by one of several Wockenfuss Candies locations.

Head to WockenfussCandies.com and browse our wide selection of chocolates and candies; we promise you won’t be disappointed! Wockenfuss Candies is one of the oldest candy makers in Baltimore. We opened our doors in 1915 and have proudly served the people of Baltimore ever since. If you have any questions about our wide selection of chocolates, please contact Wockenfuss Candies by calling 1-800-296-4414 or email info@Wockenfusscandies.com. When you’re not savoring our sweets, stay satisfied by following us on Facebook, Twitter, and Pinterest!

Categories: Chocolate
This entry was posted on Monday, March 14th, 2022 at 9:34 am. You can skip to the end and leave a response. Pinging is currently not allowed.
Want a sweet deal?
Sign-up to receive emails and save 10% off your first order.
Sign-up
By submitting this form, you agree to receive automated promotional marketing emails from Wockenfuss Candies. Unsubscribe at any time. Offer is valid for new subscribers only. Offer valid online only.